Veterans Day: A Day to Say Thank You! 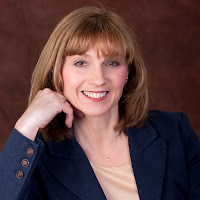 By now you're probably aware today is Veterans Day, if you live in or are a citizen of the United States. If you've Googled anything in the United States, you've seen an interesting rendering of what looks like an American Flag on the homepage.

But why do we celebrate Veterans Day?

Originally called Armistice Day, it was declared in celebration of the end of World War I, "the war to end all wars," when the Treaty of Versailles was signed on June 28, 1919 between Germany and our allies. In reality, the fighting had ceased on November 11, 1918. But after World War II and the Korean War, President Eisenhower signed the name-change into law on June 1, 1954. The specific day of celebration has changed through the years, but at the urge of veterans, the day came back to rest on November 11th.
A visit to the US Department of Defense website gives a brief history of this federal holiday and reminds the viewer that the correct way to spell Veterans Day is without the apostrophe, because "veterans" applies to all--not just one--veterans who have served "the country in war or peace -- dead or alive -- although it's largely intended to thank living veterans for their sacrifices."
But what sacrifices have men and women and their families made over the generations and why? 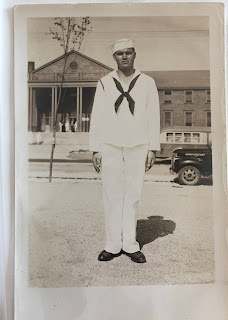 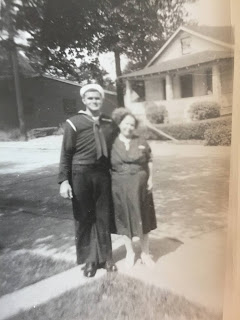 Dad, Home on Leave, WWII
In 2003, our family made a trip to Washington D.C., among many other places such as Gettysburg and Boston, tracing our nation's historical roots on the East Coast. 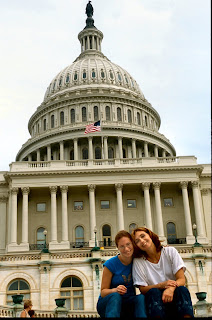 On the steps of the Capitol
Of note in the picture above, the statue on the top of the Capitol is referred to as the Statue of Freedom and is considered the "crowning feature of the Dome of the U.S. Capitol" by the Architect of the Capitol website. She stands 19 feet 6 inches tall and weighs 15,000 pounds on a cast iron pedestal.
Designed by Thomas Crawford before he died in 1857, the statue was erected in 1863. Though the architect of the Capitol Thomas U. Walter originally proposed a Goddess of Liberty, Crawford suggested an allegorical figure of Freedom Triumphant in War and Peace.
The U.S. Capitol Visitor Center describes her as wearing "a helmet encircled with stars and topped with an eagle's head and feathers, the talons hanging at either side of her face. Her long, curly hair flows down her back. Her dress is secured with a brooch with the letters 'US,' and she is draped with a fur-trimmed robe. Her right hand holds a sheathed sword, the left a laurel wreath of victory and the striped shield of the United States." The cast iron pedestal also contains the words E Pluribus Unum, Latin for "out of the many, one."
Freedom's crested helmet and sword suggest she is prepared to protect the nation from the encroachment of forces that wish to enslave her. She is ready at a moment's notice to fight and protect the freedoms Americans have so highly valued since the Revolutionary War.
Americans may still debate what those freedoms should look like and what form they should take, but out of our many opinions, we still all agree that they are worth fighting for.
So, to all those who've served and sacrificed to protect and defend us, we say "Thank you!"
An interesting aside: Canada and Australia still celebrate November 11th as "Remembrance" Day, and Great Britain celebrates the closest Sunday to that date.