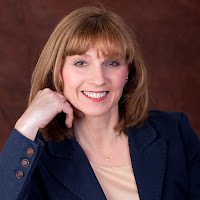 As a writer, I'm a reader of various genres--from mystery, thriller, and suspense to historical fiction and romance and, on occasion, mainstream. Each genre gives me a taste of the craft of writing from a number of excellent authors.
One of my most recent favorite cozy mystery authors is friend and co-writer Marilyn Leach. At the age of nine, Marilyn wrote her first play withe a neighbor friend—a mystery—The Ghost and Mr. Giltwallet. She’s been writing in one form or another, hobby or livelihood, since then.  As well as teaching art, she’s had the opportunity to co-author several plays that have been performed on both church and secular stages, as well as two screenplays.

Though Marilyn Leach grew up in the Western United States, she became a dyed-in-the-wool British enthusiast after exploring the United Kingdom and making lasting friends there. Her travels throughout England color her life and
written works. A keen fan of Agatha Christie’s Miss Marple and David Cook’s Hetty Wainthropp series, Marilyn was inspired to write her Berdie Elliott Mystery Series, which takes place in a small English village where the vicar’s wife, Berdie Elliott, is the divine sleuth.
In her latest in the series, All Hallows Dead, when Berdie Elliott, vicar’s wife and sleuth extraordinaire, attends a church course with her husband in the North of England, she bumps into her former newspaper boss who calls upon her to investigate beguiling circumstances that spell murder.  From the landed Cavendish family to the local pub’s manager, Criswell Abbey and its village are steeped in a centuries-old mystery.  The legend of a departed churchman, a mysterious bell tower, England’s tangled history, a delayed marriage proposal, and a wily parrot all help Berdie to declare the truth in All Hallows Dead.

Berdie Elliott and her best friend, Lillie Foxworth, often find themselves in hot water, and they’re not brewing tea.
What I found is absolutely priceless. There’s….” Berdie stopped when she became aware of clip-clop steps in the nave. “Shh.” She put her index finger to her lips.
“Why shush?” Lillie didn’t make her voice particularly quiet.
Berdie raised her brows and pointed toward the nave. “Someone’s about the place,” she whispered. “We can’t let on that we’re in here…”
The steps outside became louder. They were advancing toward the tower.
Lord have mercy.
There was a hesitation.
Berdie held her breath. She realized instantly that whoever was on the other side of the door, was perhaps one who knew all the secrets of this place which could mean she and Lillie were in very real danger.

Short autumn days and long blustery nights are just the season to read All Hallows Dead with a hot cup of tea close at hand. Cheers!